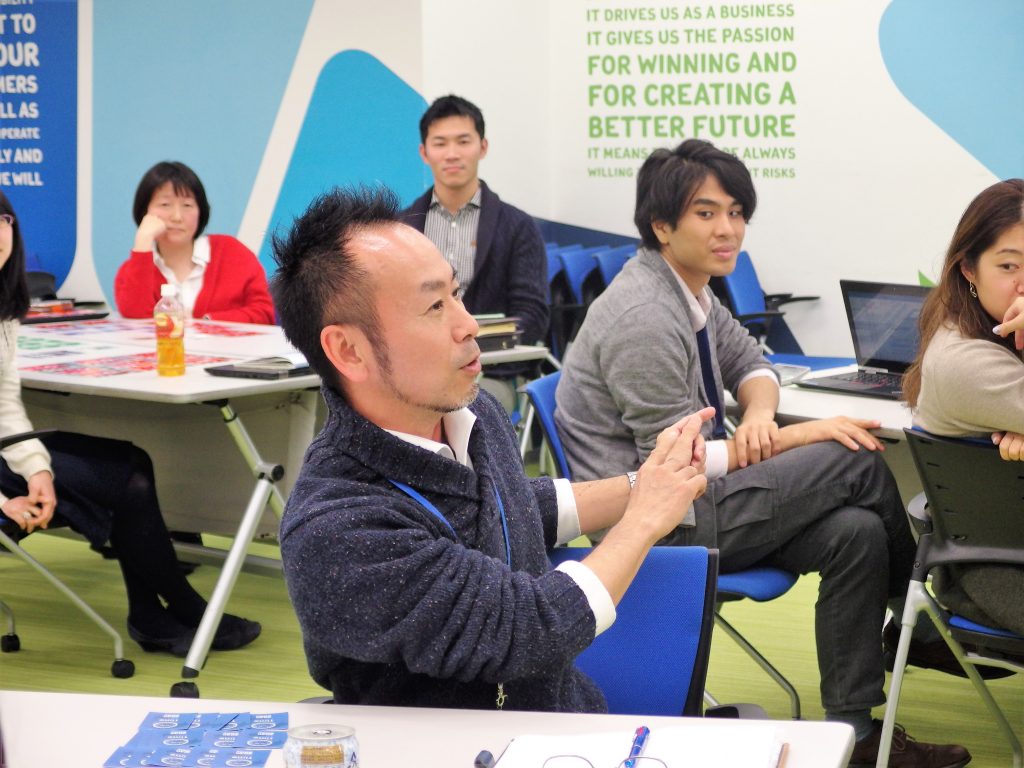 With a vision to “grow our business, whilst decoupling our environmental footprint from our growth and increasing our positive social impact,”
Unilever is one of the top leading sustainable companies in the world. Instead of seeing the environment and society as separate from its core business, they have a progressive vision of treating the SDGs as essential for growing their business.

“Many of our employees know about the SDGs; however, I want them to shift from just knowing about them to becoming “SDGs ambassadors,” ,relating the SDGs to their work and spreading them outside the company.” says Mr. Shimmyo Tsukasa of the company’s Public Relations department. 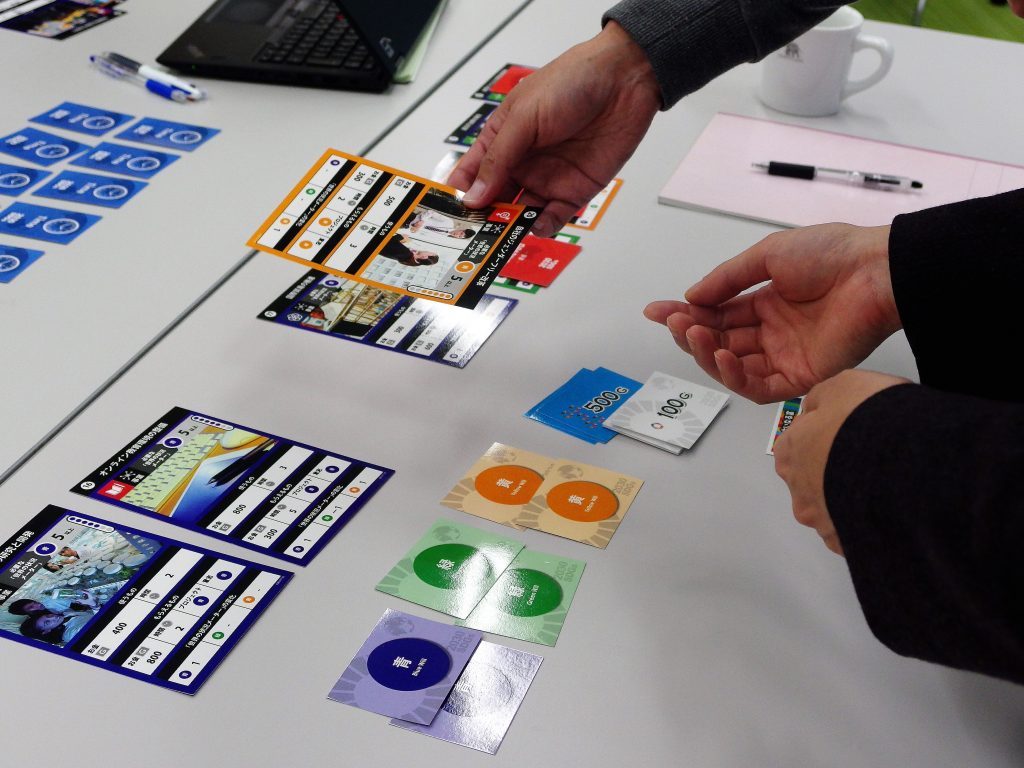 Twenty people participated in the game; lively interactions began dialogue as soon as the game started. The teams took a variety action, from running projects with their own resources to exchanging cards with other teams. A key rule of the game is that any interaction is allowed as long as there is mutual agreement.

In the eight minutes of Part One, all teams achieved their personal goals, and the World Condition Meter showed that the Economy as “booming,” while the Environment and Society were in critical condition. Voices were heard saying things such as, “This is really just like in the real world.”

In Part Two of the game, it was clear that their common goal had become changing the world condition meter. 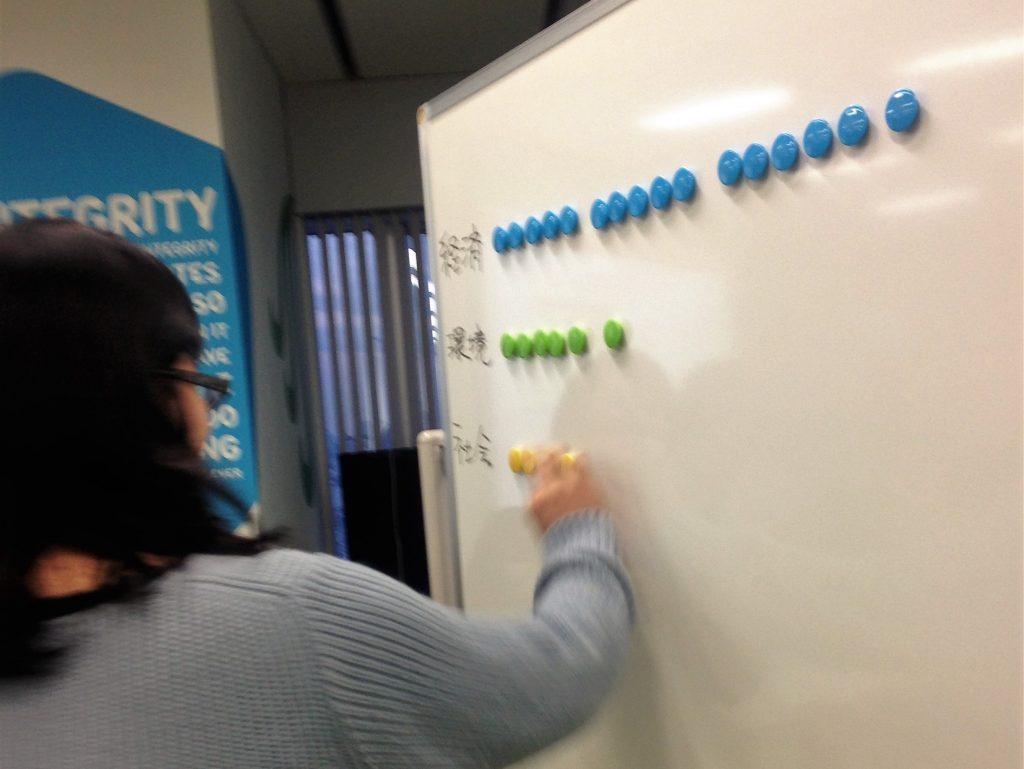 Participants began to call out to one another, saying things like “How can we boost Society? Soon everyone was calling out to one another. Participants spontaneously gathered in one place and began to compare cards and interact with one another.
When one person in the circle eventually found a way to run a project that added one point to Society,. A cheers and applause erupted in the room just as the time ran out..

Playing the game clarified own beliefs and relationships with society

After the second part of the game, participants shared impressions and discoveries through playing the game.

(Comments from participants:)
“I realized that I only started to notice others after I met my own goal. Which means that in my real work if I achieve my annual goals by the middle of the year, I may be able to contribute to my community in the second half of the year.”

“It was great that we participants could talk to each other. I think it was possible because we all could see a measure of our progress toward our goals.”

“Usually I don’t really know what other people or teams are doing. So I think it would be interesting for companies to show progress meters that people can easily understand.”

“By getting more people engaged, our activities became more effective; our successes earned praise, which motivated me even more. We should do the same at our company.” 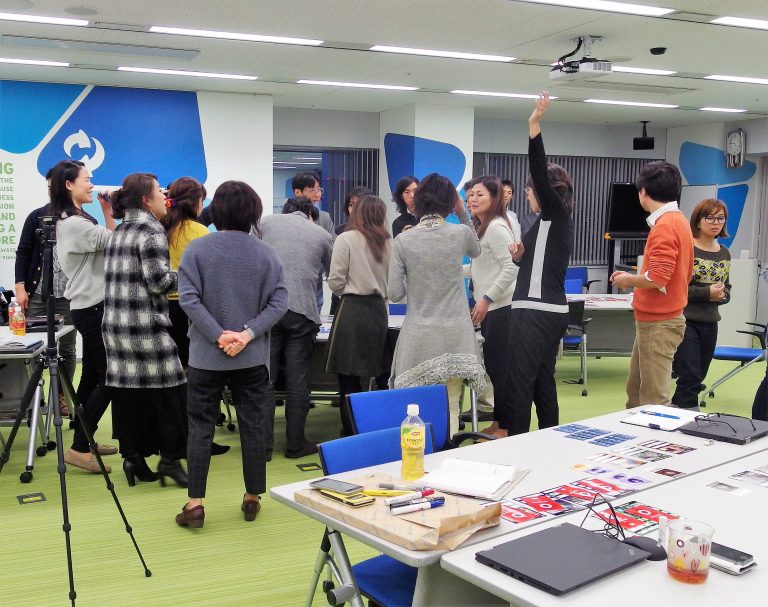 The attention shifted from participants’ impressions of the game to exploring how they could apply these learnings to the workplace.

By experiencing virtually how their actions affect the world, players deepened their understanding of the SDGs and started to care about them personally.

It’s important to look at social issues as our own issues, rather than issues that are ‘out there somewhere.’ What kind of world we create is deeply affected by how aware we are of the parameters that measure how we are doing.

The SDGs are meaningful because they make the state of the world visible and understandable and allow us to share that understanding with others.

Facilitators received comments and impressions well after the event:

“The game was enjoyable and easy to play, and it gave me an opportunity to think about the challenges of the world.”
“I had trouble speaking up for myself in the game, and I realized that this was also true in my daily life and work. There were many discoveries like this, and I am excited about trying some new ideas I got from these discoveries. ”

“I knew that the environment was important but I didn’t believe that I could make a difference by myself. Through playing the game, I realized that I do tend to focus on economic action . Now that I know this, I feel like I can find ways improve the environment. ”

“Although I was impressed by Unilever’s commitments to the environment, I felt that my own job was not really related to sustainability. Now, having experienced this simulation of what I could do up to the year 2030, I want to use the time I have to take effective action.”

“Until now, I had things I wanted to try but couldn’t see how I could actually get started. Today when I shared an idea of an action I want to take, another team member responded, “let’s do that together!” Sharing an idea for action and hearing someone say they wanted to join me was a huge takeaway.”

The Unilever employees reported that they were deeply impacted by their 2030 SDGs game experience. By enjoying a game with their colleagues, they gained a rich awareness of both their own work and how can they can take action to create a sustainable world.