In this event, the SDGs were coupled with a Business Plan Contest, and the general public as well as students participated. We interviewed Mr. Morishita of St. Andrew’s University about this event.

Why did you organize this training event?

Because I wanted students of St. Andrew’s University and local people to know more about the SDGs.

My thought was that learning about these international goals could bring educational benefits effects for students who are interested in making business plans. In addition, I thought that at least in the beginning, it would be more effective to teach these international sustainability goals to students in the form of a fun experience than as classroom lectures.

I had participated in an SDGs card game event in the past and had many learnings at that event, so I wanted to give university students the opportunity for similar discoveries. That is another reason that I organized this event.

What are your honest thoughts, now that you have held the training event?

I believe that this event gave each participant an opportunity to experience and think about the SDGs. I felt that it was great to learn about something through an enjoyable experience, rather than by listening to lectures.

Also, before and after the game, the present state of the world was explained, so I think that this was a great day for them to learn many new things.

What were some memorable moments or scenes at the training event?

Both students and the general public played the card game together, but it was memorable for me to see all of them enthusiastically interact with each other in groups and work to achieve their own goals.

I think that one reason this happened is because the game itself is designed to be used by a range of age groups. 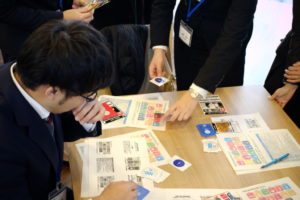 What comments and questionnaire replies were memorable?

It was striking that some students went straight to thinking about how the experience would apply to the fields they wanted to study in the future. It was also striking that many participants said that they were thankful for the opportunity learn about these international goals (the SDGs) for the first time.

What does “sustainability” mean to you?

Please share a message to readers of this article.

I assume readers of this article are already interested in the SDGs.

We held this event with the primary objective of making people aware of the SDGs, in collaboration with the Business Plan Contest held annually at our university. In this event we encourage the participation of students interested in making business plans, as well as other students and the general public. As a result of this approach, students who were unaware of these global goals became interested, and students who participated in this event told other students about the goals. In this way, these goals are gradually becoming well-known throughout our university.

I am in charge of the Business Plan Contest , and we coupled the 2030 SDGs Game event with the contest this time. However, in my view, the SDGs can be linked to a wide variety of programs, such as international experience programs, volunteer activity report meetings, or educational programs implemented by the departments at our university (Faculty of Economics; Department of Sociology and Department of Welfare of Faculty of Sociology; Faculty of Business Administration; Faculty of International Studies and Liberal Arts; and Faculty of Law). I believe that students interested in individual areas such as international contribution and social welfare can get an overview of the 17 sustainable development goals and broaden their worldviews by studying their own fields together with the SDGs.

For students, who tend to absorb things quickly, there is no doubt that, presenting the SDGs in this way provides great educational benefits.

It is my hope that holding these events multiple times will lead to everyone at our university being more interested in the SDGs. To this end, I plan to implement both programs for making the SDGs widely known through the 2030 SDGs Game and practical programs for interested students. That is where we will have deep discussions using whiteboards.

Please give us a brief comment to conclude this interview!

This event was held at our university with the help of Imacocollabo and many others. I am very grateful for that. I personally think that these international goals should be known more widely by the public.

At the moment, the SDGs are mostly only known by people who are interested in sustainability, but more and more, companies, local governments, and NGOs and other associations are actively working toward achieving the SDGs. So I hope that many people will learn about these goals in the next year or two.

As an aside, I often say to people who do not know about the SDGs, “This will be nominated as the Word of the Year in 2018 or 2019!” This may sound like a joke, but my intention is to work to make this a reality.