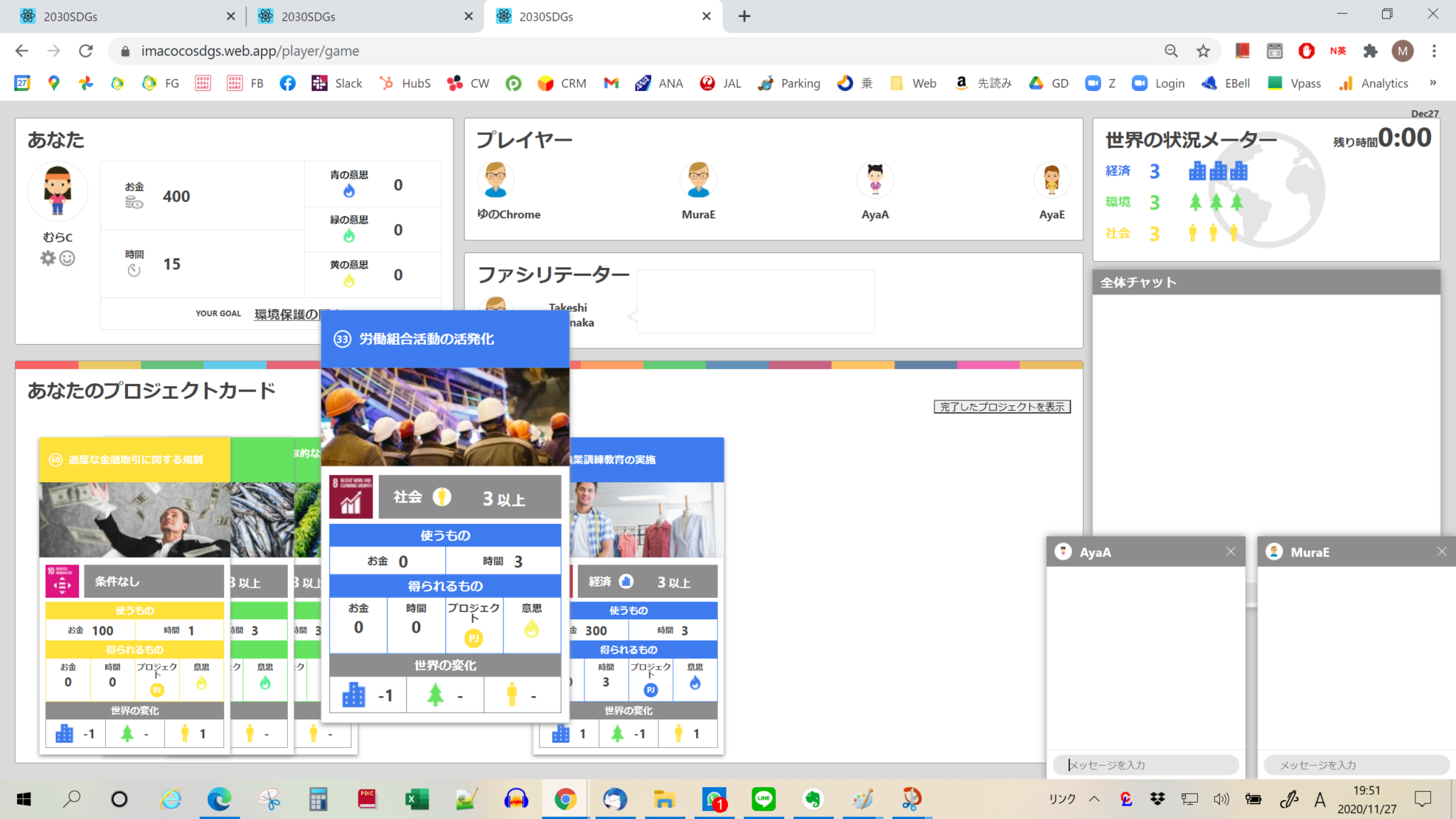 6 months after the initial conception, we finally have a beta version of the 2030 SDGs Online Game!!!

There had been a call to develop an online version of the game for several years, but I was afraid that it would be impossible to recreate the power of the in-person game. Finally, this year Covid-19 pushed us into action and we have made it a reality.

The process was a lot harder than I imagined. For a whole month it looked like it would work but didn’t, and it seemed like we were endlessly finding and getting rid of bugs. I’m profoundly glad we have finally reached the beta stage. I have nothing but gratitude for the developer (designer), Y san (name?).

The responses from those who have tried the beta version is that there are learnings and possibilities with an online experience that are not possible with the in-person game. Some of those possibilities include comparing results with many other games and showing those results, and a great deal of other things that are only possible online.

Our testing has been mostly in-house and it will still take a while before we are ready to release it to the public, but we thought you would be interested in knowing a bit more about the process, so I decided to write about it in blog form.

By the way, here is an image of what the screen looks like right now. Isn’t it lovely!!

It will change a little bit. You’re going to love it!

Thoughts about the Online Game

Some personal thoughts about 2020 and the development of the online game:

As we reach the end of the year, I’m feeling deeply into how much I miss meeting in person. Sharing a meal, having casual conversation, letting the nothing-specialness of being together be a space for anything to arise, free of any sense of artificial time restraints, free of the many awkwardnesses of navigating virtual spaces.

Even as virtual connection has become part of the ‘new normal’, part of that sense of awkwardness is still noticeable to me in my now mostly online social life.

The last English language 2030 SDGs Game Facilitator Training ended in early March of this year. We left Manila just in time for the team to get home as much of the world shut down travel, both within and beyond its borders.

Just like many people throughout the world, and with physical contact not an option for the foreseeable future, as a team we turned our attention toward virtual spaces and began to explore new possibilities.

Obviously, I’m talking about the development of an online game experience, but not only that: also, in the bigger picture, we have been asking each other over and over this question: “what new possibilities can we discover in online spaces that may not be accessible in a physical space?” I notice this question coming up in all of my circles.

I trust that many of you have been asking similar questions this year and making your own discoveries. Personally, one thing I am deeply grateful for is this year’s gift of connection with my family. Most of my family live on a different continent from me, and I have happily seen more of them this year than in any other time of my adult life.

We on the Imacoco global team are eager to share with you the results of this “something” we have been creating.

Those of you who joined us for the tests of the first prototype will know that first, we had to face the need to let go of the idea of reproducing the in-person game experience in an online forum. We saw that no matter what, this would be a different experience, and that in the near future we would all no doubt discover together what this new “something” is, or what it is becoming. Perhaps even “what it wants to be…”.

Honestly, none of us thought that it would take so long. As much as we want to involve you in the process, I wouldn’t willingly inflict the “debugging” stage of the process on anyone. That stage, to me, is like turning on the radio to hear a symphony, and hearing static in the background: it may not be necessary to get rid of 100% of the static to hear the melodies and get a sense of the music, but for the composers, it is torture.

Now that most of this static is cleared, we want to share it with you: to experiment, to explore how it could be used―and to invite you to come up with things we haven’t even considered.